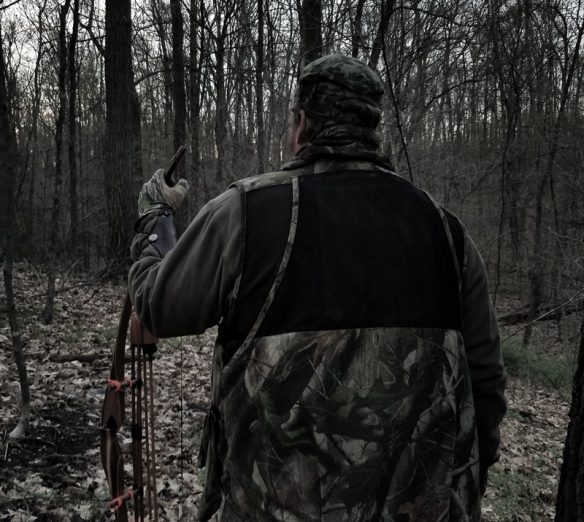 Wikipedia defines an oath as “a solemn promise, often invoking a divine witness, regarding one’s future actions or behavior.”

While not divine, I was recently a witness to such a promise.

I have a “turkey hunting” friend. He probably isn’t too difficult to imagine if you know someone similar. You are probably thinking of him (or her) right now, in fact. I would wager they are cut from the same cloth – yours and mine – and would get along swimmingly should they ever meet in the real world. (Unless they are the competitive sort. We should pray for the opposite, in that case.)

My turkey hunting friend’s name is John and nothing winds his clock more than a 6 am fly down or a gobble on the roost. John lives for these scenarios. You can see it in his eyes when he’s on a bird, and in his voice when he talks about the one (or two) that got away. There is nothing he’d rather be hunting than the bird, even when he’s hunting something else. I’ve heard too many blasphemous statements in the deer woods to believe otherwise. “Man, I’m seeing turkey scratch all over. If I hear a gobble, its game on, deer be damned!”

He loves to eat turkeys too, but that goes without saying.

It was his passion for the pursuit of this bird that made John the perfect candidate for longbow recruitment. He liked to do things the way I liked to do things, only he was using a shotgun. I would send him photos of bows and arrows. He would send me photos of calls he was working on. It was only a matter of time before our addictions crossed. John started shooting a longbow and I started hunting turkeys.

We mentored each other that first year. John made his first bow and I acquired my first calls and shotgun. We were both equally awful at the other’s endeavor. I was making horrible noises in the turkey woods and John was shooting groups the size of a hay bale into his hay bale. Still, the seeds had been planted. Improvement was inevitable. I gave up the shotgun a season later. It felt wrong to be in the woods without my bow. John wasn’t quite there, but a gun was feeling less-and-less “right”. He started the season with his bow, reserving his 12-gauge for a sudden death scenario. He ended up shooting a nice bird that season, but those closest to him could see it didn’t make him feel the way it used to.

What John was feeling, is actually quite common. Once you’ve spent time afield with a stick-and-string, it is very difficult to be in the woods with anything else. It eventually becomes a part of you and everything you do, see, and feel. I was privy to all of this. And I was there when the aforementioned oath was made.

“I’m going after turkeys again this year. And I’m doing it longbow only. I don’t even care if I get a bird.”

“Really…” I said, raising my eyebrows in astonishment. He shot me a look as serious as death, then he nodded. “Oh yes. Longbow. Wood arrows. Public land. Boots on the ground. Going after ’em!” It was a gem of a promise. Something you might hear amidst the inebriated blustering of one of the turkey elite following their 100th kill. But he meant every word and I found that infectious. “I suppose I’d better go with you then.” I sighed. “Can’t let you have all the fun, can I?”

This site uses Akismet to reduce spam. Learn how your comment data is processed.